On the evening of the 30th July 2020, I was fortunate to attend my first ever Islamic celebration. Named Chaand Raat, which means “night of the moon,” the celebration is usually marked before Eid or at the beginning of the new Islamic month. Though the event is celebrated in several countries, I was largely in the company of Pakistanis and British Pakistanis.

My friends who accompanied me remarked that the festivities were greatly scaled down this year due to the COVID-19 pandemic. But even so, Ilford Lane in London seemed to go on for miles with shops open past midnight selling clothes and food. Stalls were set-up along the road too, at many of which Muslim women were sat decorating the hands and arms of women with mehndi (henna). Despite fears of being called out for cultural appropriation by my fellow Brits, my Muslim friends encouraged me to have my hand decorated for the first time and it was beautiful. 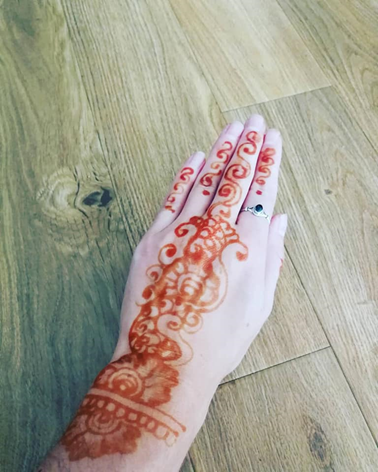 Though the celebration is defined by clothes shopping, eating and dancing to music, there was an air of calm whereby there was no aim but merely to enjoy the ambience. This was refreshing: London is usually characterised by hurried commuters who never stop to interact with others or to notice any beauty in their surroundings.

Despite feeling entirely safe and welcome throughout the celebration, I did notice that I was garnering more attention than most. Wherever we walked, most people would stare at me as they passed by. This was not surprising given that I was walking with Muslim men dressed in traditional Pakistani clothes and women wearing hijabs and I was wearing jeans and a long-sleeved top. I also saw very few other White people throughout the evening.

This led me to the question of religious and racial integration in the UK. Many accusations have always been levelled against Pakistani communities here for not trying hard enough to integrate into society. But this issue runs both ways. I was struck by the fact that I was one of a very small number of white Brits to attend the celebration. Not once did I feel unwelcome or was abused for my identity. Instead, I was fed food by a woman I have never met before and accompanied by another, arm-in-arm, through the streets.

In a candid conversation with a Pakistani friend who also attended, I was told that it was normal for him to not see white people walk on the streets of his neighbourhood. Rather, they actively avoided the area. Though there may have been ethnic and religious disputes in the past, they are not as common as they used to be, especially not against white people. Thus, there is generally no logical reason for white Brits to fear attending such events out of fear of racial abuse. If we all avoided things out of fear that something might happen, we would never attend or achieve anything.

There was by no means a lack of diversity on Ilford Lane. Pakistan is an ethnically diverse nation and has ethnic ties with its neighbouring countries too. But the lack of white people might be explained by the mutual ‘fear of the other’ that white and Pakistani communities have of each other in the UK. This may not be based on concrete events in the past to which we might point and say, “yes, that argument or that fight caused racial tensions within these communities.” Instead, if these communities have not engaged with one another, they are less likely to understand or seek each other out.

I was in attendance at Chaand Raat because I had shown interest in Pakistani and Islamic culture to those people in the past. Once you show genuine interest in another person’s culture or religion, barriers are broken down and replaced by bridges of commonalities and friendship. They appreciate that a native of the country they have moved to is equally interested in their background.

Recent catastrophes, such as the murder of George Floyd, and victories for social justice, like the toppling of statues celebrating slave-traders, remind us that not all racial, ethnic or religious tensions or issues have been alleviated. Indeed, the pandemic has highlighted that people of Pakistani or Bangladeshi descent in the UK are around 50% more likely to die from COVID-19 than white people and this is not just down to health but due to socio-economic factors too. Such statistics, as clearly identified by reports by Public Health England and the Office for National Statistics, suggest that the UK has a long way still to go in order to provide true equality and integration.

Until this is achieved, and beyond, we must continue to strive to understand one another better. How we view those of different racial or religious backgrounds to ourselves impacts whether we employ people without discrimination, whether everyone has equal access to health care and whether we can live together in harmony without fear of hate crime.

The first step is dialogue. Seek out different religious institutions and ask about their traditions. Strike up a conversation with a stranger who is speaking a foreign language. Educate yourselves on the reality of a religious or national tradition before judging it. Most of the time, you will be met with kindness and appreciation for freely engaging with another human being who, on the surface, appears dissimilar to yourself but in reality shares your love for life and for people.